As of 5/7/19 we’ve seen quite a jump in homes for sale .  There are now 4 townhomes and condos  on the market in Fusion. For various reasons there

have been very few homes for sale in this gated community in the South Bay but that’s changed a bit. That’s good news for home buyers. Not only does that make negotiating slightly easier, but there is a variety of Fusion floorplans now for sale. Ranging from the smallest 2 bedroom B layout to the rare 2 bedroom H floorplan that’s the biggest 2 bedroom in the community. In addition to the 4 homes currently on the market we’re aware of an off market home as well making for an even greater number of homes and floorplans available.

Want an easier way to search for homes?  Tell us just a bit about your ideal home and we’ll customize a search just for you and send you an email update whenever a new home hits the market in Fusion.

When home buyers go into escrow in Fusion at some point they’ll find out that there is a mello roos in the community.  In general it means that there is a yearly addition to the normal property taxes.

Background
In 1978 Californians enacted Proposition 13, which limited the ability of local public agencies to increase property taxes based on a property’s assessed value. In 1982, the Mello-Roos Community Facilities Act of 1982 (Government Code §53311-53368.3) was created to provide
an alternate method of financing needed improvements and services.

The Mello-Roos Community Facilities Act of 1982
The Act allows any county, city, special district, school district or joint powers authority to establish a Mello-Roos Community Facilities District (a “CFD”) which allows for financing of public improvements and services. The services and improvements that Mello-Roos CFDs
can finance include streets, sewer systems and other basic infrastructure, police protection, fire protection, ambulance services, schools, parks, libraries, museums and other cultural facilities. By law, the CFD is also entitled to recover expenses needed to form the CFD and
administer the annual special taxes and bonded debt.

What is a Mello-Roos?
A CFD is created to finance public improvements and services when no other source of money is available. CFDs are normally formed in undeveloped areas and are used to build roads and install water and sewer systems so that new homes or commercial space can be built. CFDs are also used in older areas to finance new schools or other additions to the community.  This is why we see a mello-roos in Fusion as it went to pay for the infrastructure for the community as it didn’t exist prior.

What is the Mello-Roos in Fusion?

While the amount of the mello-roos can vary and can change the mello-roos for owners in Fusion is currently (and approximately)  The table below is from a 2018 escrow with specific information at that time.  While we cannot guarantee the information below the contact number listed is 714-541-4585 for updated information.

How is a Mello-Roos CFD Formed?
A CFD is created by a sponsoring local government agency. The proposed district will include all properties that will benefit from the improvements to be constructed or the services to be provided.  A CFD cannot be formed without a two-thirds majority vote of residents living within the proposed boundaries. Or, if there are fewer than 12 residents, the vote is instead conducted of current landowners. In many cases, that may be a developer.

Once approved, a Special Tax Lien is placed against each property in the CFD. Property owners then pay a Special Tax each year. If the project cost is high, municipal bonds will be sold by the CFD to provide the large amount of money initially needed to build the
improvements or fund the services.

How is the Annual Charge Determined?
By law (Prop. 13), the Special Tax cannot be directly based on the value of the property. Special Taxes instead are based on mathematical formulas that take into account property characteristics such as use of the property, square footage of the structure and lot size. The
formula is defined at the time of formation, and will include a maximum special tax amount and a percentage maximum annual increase.

How Long Will the Charge Continue?
If bonds were issued by the CFD, special taxes will be charged annually until the bonds are paid off in full. Often, after bonds are paid off, a CFD will continue to charge a reduced fee to maintain the improvements.  According to the information from the table above the Mello-Roos will end in 2041.

IMPORTANT TO KNOW:
• Rights to Accelerated Foreclosure. It is important for CFD property owners to pay their tax bill on time. The CFD has the right (and if bonds are issued, the obligation) to foreclose on property when special taxes are delinquent for more than 90 days. Additionally, any costs of collection and penalties must be paid by the delinquent property owner. This is considerably faster than the standard 5 year waiting period on county ad valorem taxes.
• Disclosure Requirement for Sellers (California Civil Code §1102.6). When reselling a property in a CFD, the seller must make a “good faith effort” to obtain a Notice of Special Tax from the local agency that levies the Special Tax, and provide it to the buyer.

Fusion South Bay is located in the Hollyglen area of Hawthorne CA. Hollyglen is a great alternative to neighborhoods like West Torrance and

Southwood (Torrance) as it has a similar look and feel but prices are generally a bit more affordable. It’s also populare with commuters as it lessens the drive time by quite a bit with convenient access to the freeway. The neighborhood of Hollyglen sits west of the 405 Freeway, north or Rosecrans and south of El Segundo Blvd. Most of the homes in Hollyglen were post war 40’s and 50’s bungalows ranging between 900 and 1,400 feet. Prices have risen dramatically over the past few years with homes ranging between the low $700,000s to over a million. One of the strongest appeals to Hollyglen is the award winning Wiseburn School District. A past concern was the lack of a high school in the district but that’s changing with the completion of Wiseburn High School. At the top corner of the community sits Three Sixty at South Bay which is a very popular alternative to Fusion.

Many home buyers that are interested in Fusion are also looking at 360. Three Sixty is a few years newer than Fusion and has amenities to rival a luxury hotel with multiple pools, jacuzzi, state of the art fitness center, incredible clubhouse rooms, dog park, multiple parks and a sport court with basketball and paddle tennis. There are a number of layouts and floorplans including the single family style detached Terrace homes, single level condos in the Flats and townhomes in the Courts, Row, Townes and more. Prices range from the low $600,000s for a studio in the Flats up to $1.3M for the largest of the Terraces.

One of the elements that makes Fusion at South Bay such a great community  is the award winning Wiseburn School District.  Although located in the city of Hawthorne,

Hollyglen residents attend this award winning school system.    One of the main concerns residents have had over the years is the lack of a local high school.  Students that graduated from the local middle school were often then enrolled in the Centinela Valley district.  As of 2015 a bond measure was passed for the construction of a local high school that will be located in nearby El Segundo.

The Wiseburn Unified School District is a small  public school system in the El Segundo/west Hawthorne area that serves the Wiseburn communities of Del Aire, Hollyglen, and Wiseburn.

The Wiseburn Unified School District has entered into a  partnership with the Da Vinci Charter Schools  since 2009.  These independent charter schools were locally created to provide a high school option for Wiseburn students.  As mentioned above, in 2015 a bond measure was passed allowing for the construction of the Wiseburn High School campus that would house the three separate Da Vinci Charter Schools.

As the Wiseburn district is hightly sought after the district has boundary requirements for local residents.  The district boundaries are roughly Sepulveda Boulevard on the west, Marine Avenue on the south, Imperial Highway on the north, and Inglewood Avenue on the east.  **Please note that we are providing the following for information only and cannot guarantee eligibility to the district.  Please consult with the district offices to determine residency restrictions and elegibility for the district.

The northern and southern boundaries west of Aviation Boulevard are Imperial Highway and Rosecrans, respectively with Sepulveda.  The area is part of the City of El Segundo and is mostly commercial space.

Current Homes for Sale in the Wiseburn School District**

With only 17 home sales in all of 2018 it’s pretty clear that sellers were surprisingly in no rush to list their homes.  Inventory remained low for the year and hopefully 2019 will see a great number of homes for sale in Fusion.  The year is starting off well with a new “C” floorplan that just came on the market priced at $735,000.  Listed with Jodi Keel of D Reams and Co, the floorplan is one of the smaller layouts but unlike the A & B units, the home has an attached garage.  Call, text or email us for more information on this newest Fusion listing.

2018 was a great year for home sales in Fusion At South Bay, one of the South Bay’s only newer construction gated communities.  There were 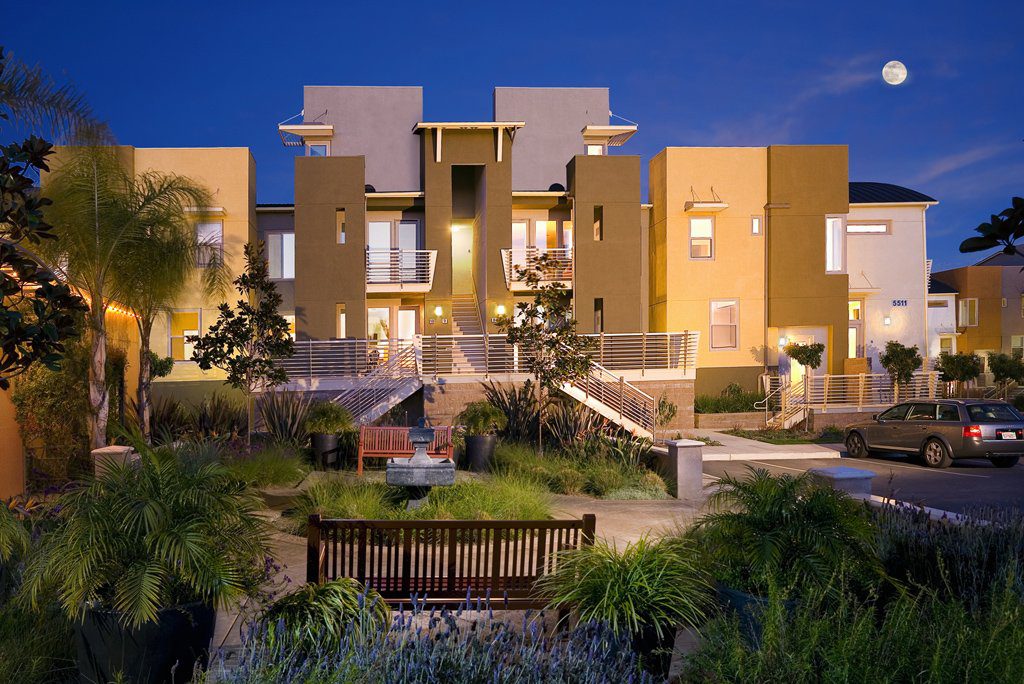 17 home sales with the low price of the year at $670,000 for a 1,000 (est) foot B floorplan and the highest price of the year was $855,000 for a 3 bedroom J unit.  The unit originally sold even higher but ran into appraisal issues.  The average price per foot (which doesn’t necessarily mean as much as usual as some realtors use the builders data, showing larger square footage, and some realtors use the tax assessor’s data, which is often much smaller) was $597 and median price per foot was at $602.  Located in the Hollyglen neighborhood of Hawthorne, Fusion sits just across the street from Manhattan Beach which lends itself to an even higher demand as many buyers are priced out of the adjacent neighborhoods.  The homes were generally built in 2006-2008 (with some variance).  Although there are currently no active homes for sale we do update our active Fusion listings page so visit to see any new listings.

Average days on market was 11 for the year….incredible.