While it might not be in Fusion we wanted to share our latest  sale nearby.  5449 Strand #103 which sold for $875,000.  We are happy to announce our latest sale in 360.  We represented the buyer in the purchase of of this beautiful residence 1 townhome in Row.  We thank our client for putting his trust in us and we couldn’t be happier for the latest homeowner in the community.  Three Sixty specialist Keith Kyle of Vista Sotheby’s International Realty represented the buyer.   View all of the recent sales and pending escrows in Three Sixty South Bay

View the current homes for sale in Three Sixty

Fusion South Bay is located in the Hollyglen area of Hawthorne CA. Hollyglen is a great alternative to neighborhoods like West Torrance and

Southwood (Torrance) as it has a similar look and feel but prices are generally a bit more affordable. It’s also populare with commuters as it lessens the drive time by quite a bit with convenient access to the freeway. The neighborhood of Hollyglen sits west of the 405 Freeway, north or Rosecrans and south of El Segundo Blvd. Most of the homes in Hollyglen were post war 40’s and 50’s bungalows ranging between 900 and 1,400 feet. Prices have risen dramatically over the past few years with homes ranging between the low $700,000s to over a million. One of the strongest appeals to Hollyglen is the award winning Wiseburn School District. A past concern was the lack of a high school in the district but that’s changing with the completion of Wiseburn High School. At the top corner of the community sits Three Sixty at South Bay which is a very popular alternative to Fusion.

Many home buyers that are interested in Fusion are also looking at 360. Three Sixty is a few years newer than Fusion and has amenities to rival a luxury hotel with multiple pools, jacuzzi, state of the art fitness center, incredible clubhouse rooms, dog park, multiple parks and a sport court with basketball and paddle tennis. There are a number of layouts and floorplans including the single family style detached Terrace homes, single level condos in the Flats and townhomes in the Courts, Row, Townes and more. Prices range from the low $600,000s for a studio in the Flats up to $1.3M for the largest of the Terraces.

What an incredible year it was in the gated community of Fusion South Bay.  Demand for these newer townhomes 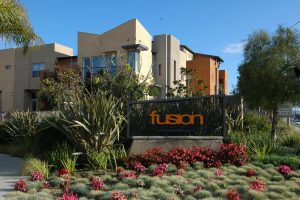 remained heated and homes prices reflected that with home values skyrocketing.  The influx of demand from nearby tech companies such as Google, Yahoo, Spacex and more added to the already strong demand.  Fusion, along with 360 South Bay, are two of the only recently built gated communities with such and ideal location and are a great alternative for buyer’s looking for Redondo or Manhattan Beach.  Below are all of the home sales in Fusion for 2017.  As of this post there are currently no active homes for sale in Fusion but check our current Fusion South Bay listings page as it’s continually updated or sign up for FREE listing updates and never miss a new listing again.